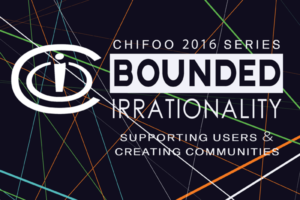 Designers are often told that users seek easy answers which are arrived at rationally. Said users are bound by predictable, limited amounts of time, knowledge and interest. They are bound and are understood by bounded rationality. The influence of psychologists and economists has trained us to frame solutions with this precept. Bounded rationality belies the experiences of delight and frustration in users and, perhaps, gives designers a little too much credit for knowing the user.

Design is about solving problems. Designers and developers try to help users be productive, connect, and learn in a secure online environment. Paradigms for community, individuality, health, and success have changed with new technology. The problems we solve aren’t always mediated by rational actors, nor do rational actions result. Amid changing technologies and contexts users are only limited by data plans and price points. As designers and users we’re now operating in a bounded irrationality.

There are three categories of focus in this year’s speaker series: Presumptive Design/UX Design (Orange), Design Practices/Education(Green), and Building Communities/Supporting Users (Blue). Each category has been assigned a color so that it can be followed throughout the year more easily.

A MEDIA FOR A CHORUS OF VOICES
March 2, 2016
Ward Cunningham